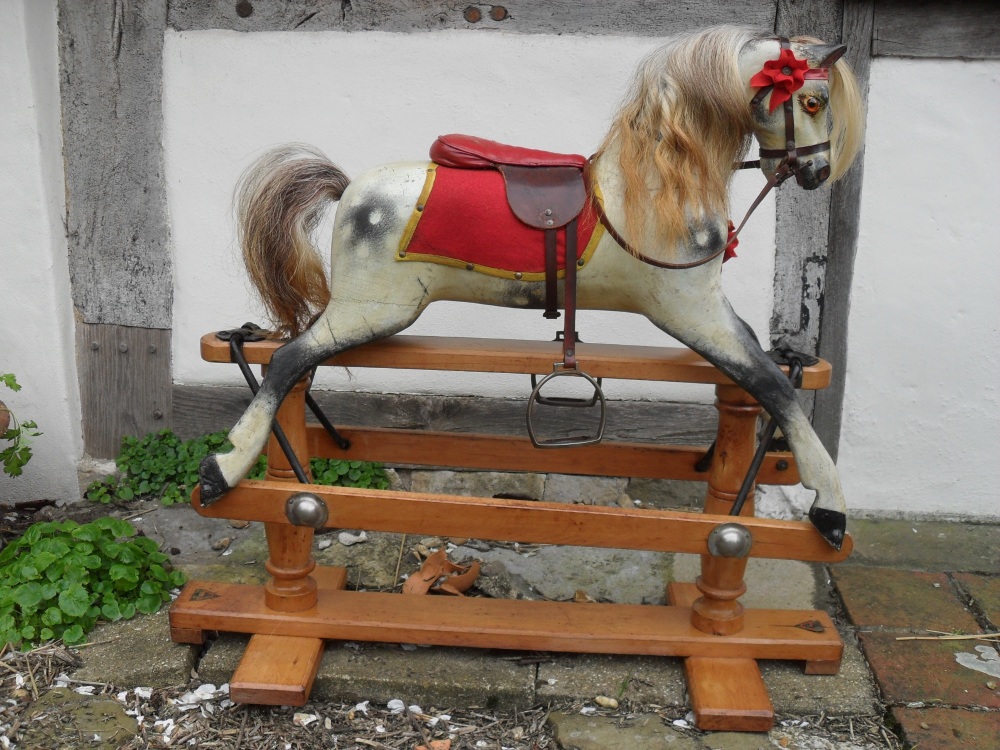 BLAKE is a rare SIZE 1 rocking horse at 33 inches high, in remarkably good near original condition with minimal paint repair to legs and eyelashes. He has a partially replaced mane, tail, and rosettes retaining what was left of his original, a replacement saddle blanket which copies exactly his original as it was beyond repair (the yellow trim is an old school games sash as it was a perfect match), replacement rains, stirrup leather and belly band which now holds his original saddle safely in place. His rosettes were partially replaced with ribbon of the same age (the ribbon came from an old sports whistle). BLAKE has three fresh new coats of shellac protecting his paintwork that matches the original colour. His bowler hats are original, they just needed a good clean.

Conserving his original dapples and paintwork meant cleaning him was a  slow process as he was very dirty and covered in sticky soot deposits, probably spending a lot of his life in his owner's loft with perhaps a leaking chimney flue!

He had been with the same owner from new (about 1920's) but 10 years ago almost ended up in a skip. The elderly owner's house had been boarded up for years and was being demolished but luckily the little horse was rescued by a neighbour who was intent on restoring him herself but was not able to find time so that’s how he came to be with me. However, she did find a letter under his saddle written by the original owner to his parents in 1957.

Little Sporti is looking very smart once again and ready for his new home.